Posted on July 4, 2013 by stradacorsajim

Yesterday we left La Pine and headed upward toward the Cascade Mountains again. We stopped in Chemult at a Pilot Truck stop to get a Subway sandwich. As we are getting ready to ride again, up pulls Ethan’s nana and great aunt! They were on their way back from Bend to Shady Cove and stopped for gas. I think that was fun for Ethan.
We stopped at the turn off to the 138 at a little motel/market to get something to drink- it was hot. The lady took us out front and showed us the thermometer; it read 106′! We knew it was hot, but didn’t realize how hot.
We continued about 9 more miles up the hill and headed off on a fire road to dry camp for the night. Found a spot…and mosquito central. We set up camp, had a quick dinner of Mac-n-cheese, then retreated to our tents for the night. There were plenty of big black ants and hover flies around as well.
This morning, we wrapped up camp, beat a hasty retreat from the bugs and ate a cold breakfast about a mile up the road.
Today was a spectacular day. We climbed up to 7600′ and onto the rim road around Crater Lake. Crater Lake is a caldera lake located in the south-central region of the U.S. state of Oregon. It is the main feature of Crater Lake National Park and famous for its deep blue color and water clarity. The lake partly fills a nearly 2,148-foot deep caldera that was formed by the collapse of the volcano Mount Mazama. Human interaction is traceable back to the indigenous Native Americans witnessing the eruption of Mount Mazama. There are no rivers flowing into or out of the lake; the evaporation is compensated for by rain and snowfall at a rate such that the total amount of water is replaced every 250 years. At 1,943 feet (592 meters), it is the deepest lake in the United States, and the seventh deepest in the world.
We got some great shots as we circled part of the rim. Then we bombed down the south side of the mountain, joining the Rogue River and coasting through thick forest.
A great few days that deserves a shower; so we got a room at the historic Prospect Hotel. It is a historic building built in 1888 by Albion H. Boothby. It was a stagecoach inn for travelers to Crater Lake. Guests have included Jack London, Theodore Roosevelt,Zane Grey, John Muir, and William Jennings Bryan.
Other highlights of the day: crossed the Pacific Crest Trail three times; stopped at the Rogue River Gorge and saw some intense whitewater; met a fellow cyclist doing the Sierra Cascades Route from south to north. RW was his name and a great shout out to Yucaipa Bike Center and Mike who he said was the most helpful bike shop on the route so far. It was a kick that he remembered the details of town, where he ate, camping at the regional park, and the big climb up to Big Bear. 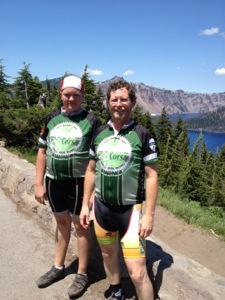