The last few days I have continued pedaling down harrowing, mostly shoulderless highway 89. The countryside is beautiful, alternating between climbs up forested ridges and dropping into valleys with lakes, reservoirs, or ranches.
On Wednesday, I passed Lake Almanor and caught my last backward glance of Mt Lassen. I stopped in the little town of Greenville for lunch and ate in the old Wells Fargo building built in 1860. I then entered the Indian Creek Canyon- hairy cycling with lots of logging trucks and no shoulder. But I was following the route of the transcontinental railway and saw the incredible engineering that went into its construction and was thinking of the thousands of Chinese laborers who built it; the railway is suspended on the wall of the canyon.
After spending the night outside Quincy, another quaint town, I climbed Lee Summit and followed the Feather River through Graeagle, over another pass, then into a large valley where I encountered two cowboys herding cattle. I stopped to watch their expertise with their horses and the control they had in directing the stock.
I climbed a ridge to a remote campsite and was entertained for the evening by a pair of chipmunks burrowed in an old tree stump. One was Mr. Cautious, disappearing every time I twitched; the other was Mr. Happy-Go-Lucky, venturing out and about my camp looking for just one more morsel. I shared a couple almonds with them and Happy sat on the stump and chowder down while Cautious grabbed his and jumped into the stump.
This morning, after a short climb, I dropped into Truckee and met a former student of mine, David Bunker, and his infant son Dylan for lunch. It was great to catch up; he comes from a wonderful family, the Bunker clan, and has a beautiful family of his own.
Following the Truckee River, I passed Squaw Valley, home of the VIII Winter Olympics, and rode the Truckee River Bike Trail which follows the first few miles of the river from its origin at Lake Tahoe and extends a ways down the west shore of the lake as well. There were HUNDREDS of people floating the Truckee- looked like a lot of fun. I have a campsite at Meeks Bay about 100 yards from the shoreline. It’s a huge site that could fit a 50′ rig; it looks funny with just my bike and two-man tent set up. Last night they had two bears in camp…I’ll keep you posted. 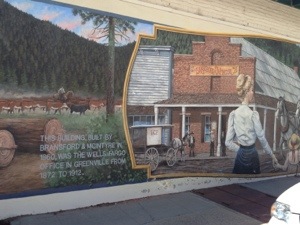 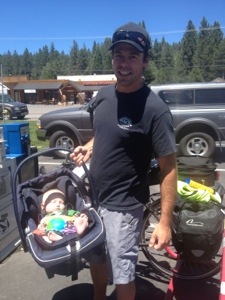