I woke up early and got on the road by 6am today. The wind had howled through the night and I knew today was going to be a challenge! 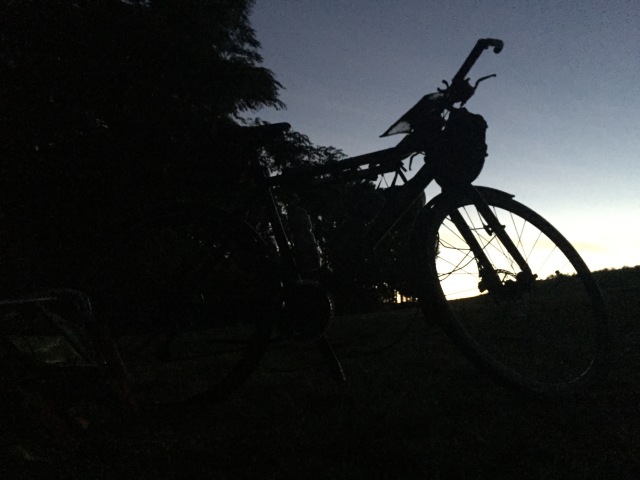 I rode steadily for about 25 miles, with the wind at a sustained 12-15mph. I stopped in Roosevelt at the Mini Mart and had a breakfast burrito to die for! I also met Steve and Marcia, who started last week on the Pacific Coast and are traveling the next three months back to their home in Maine. Marcia just retired from teaching middle school. They are Christians and we had a great time of fellowship talking education, theology, and about life in general.

When I got back on the road, the wind had picked up and it stayed nasty all day. At points in the gorge, I’m sure it was a sustained 25mph, with gusts up to 35 or so. This was one of a handful of times in the thousands of miles I’ve toured that’s I had to pedal downhill. Of the 60 miles today, I literally had three stretches that I was able to coast- two were about a half mile long, and the last was the 2 mile drop into Maryhill State Park; although I pedaled part of it to maintain balance in the fierce crosswind.

My camp neighbors, Sean and Shondra, brought me over two gatorades as soon as I pulled into camp. They are from Vancoiver and out camping for the weekend.

Right after I left camp this morning at Crow Butte, I passed an island where the Lewis and Clark Expedition stopped for lunch at an Indian village on Oct. 20, 1805. They described a large burial area, and one group of hunters brought back nine ducks and a goose. They also noticed a lot of trade goods, “Such as copper kittles…also scarlet & blue cloth robes. One has a Salors jacket.”

On 10/20/1805, they woke to a “very Cold morning” and set out early because they had no fuel and could not cook breakfast. They ended up paying a high price for wood from the natives, but commented, “Those people received us with great kindness and examined us with much attention.

Near the John Day River,they saw their first sign of timber and saw Mt. Hood. They camped just a little upriver from where I am tonight.

Another great day- a hard one- but I am thankful for a healthy body and God’s strength that got me through!