When I woke up this morning something was different: it was cloudy and cold! I bundled up and started breaking down camp and realized my rear tire was flat, delaying my start.

Once I got on the road (I was shivering!) I realized the cloud coverage was probably moderating the headwind, which was only a gentle 5mph or so. Another little lesson to see the good in every situation!

As the cloud cover burned off, the headwinds progressively increased. I was pedaling by some beautiful wetlands; saw an elk; a pair of Whistling Swans (they are the two white dots in the picture below- they are the largest waterfowl in Oregon with a wingspan of 7 feet); and some beautiful flowers: 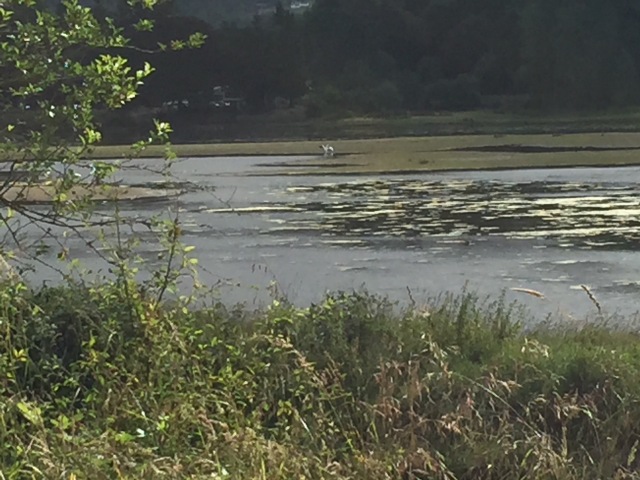 By midday, there was a strong headwind and rolling hills. It was one of those phenomenons on a bike I have encountered on rare occasions: you crest a hill and feel the full force of the wind, so you have to pedal going downhill. You finally start getting out of the wind as you reach the bottom of the hill, only to have to start climbing again. So essentially, you never have a break from pedaling. It’s quite the workout!

The river really started widening out. I went by huge lumber mills in the area of Longview, WA and had to dodge wood bark all I’ve that road:

I pedaled 64 miles and made it into Astoria by late afternoon. I set up camp at an RV park on the east end of town- they have given me a patch of dry grass to call my own. I was so tired last night that I fell asleep without posting. So I’m catching up before I hit the road on my final day to the Pacific Ocean!

1 Response to Astoria or Bust!