Lewis and Clark in the Columbia Gorge And Beyond

As I’m pedaling along on my paved roads, hugging the edge of the canyon walls, I can’t help but think of the incredible journey of the Corps of Discovery. They were stuck for four days in the area of The Dalles because the headwinds were so bad. I experienced them for a couple days, but could progress forward. They were subject to nature and natural forces their entire trip. Also, it being late October 1805, it was getting cold. On Oct 29, they left at daylight and the wind were calm enough that they made it around Crates Point and had a great day of progress.

They passed the Hood River, and also the White Salmon River, which they called Canoe Creek, named for the large number of canoes at the village there. They had more views of My Hood. Clark noted that the Indian robes were made of wolf, deer, elk, wildcat, fox, and even one from a mountain goat.

On Oct 30, they had lunch at the Wind River, at the current location of Carson on the WA side, and could “plainly hear the roreing of the grand Schutes below,” though they were still seven miles away. The next day, Clark described the river in the “Great Shute… Is about 1/2 miles with the water of this great River Compressed within the Space of 150 paces..water passing with great velocity and forming and boiling in the most horrible manner.” Nov 1 was spent portaging around the falls at Cascade Locks. On the 2nd they passed Multnomah Falls.

They now entered the calmer waters below the gorge and camped on the north side of Government Island, they named it Diamond Island, and passed what is present-day Portland and Vancouver on the 4th. They had trouble sleeping at night because of the noise of swans, geese, white and black brants, ducks, and Sandhill cranes, with Clark saying, “they were emensely numerous and their noise horrid.”

As the Columbia turned north, the Corps of Discovery experienced thick fog, rain, and more noisy birds. Clark was impressed by the ornately carved canoes used by the tribes in this region: “one of those Canoes is large, and ornamented with Images on the bow & Stern. That in the Bow the likeness of a Bear, and in Stern the picture of a man…” 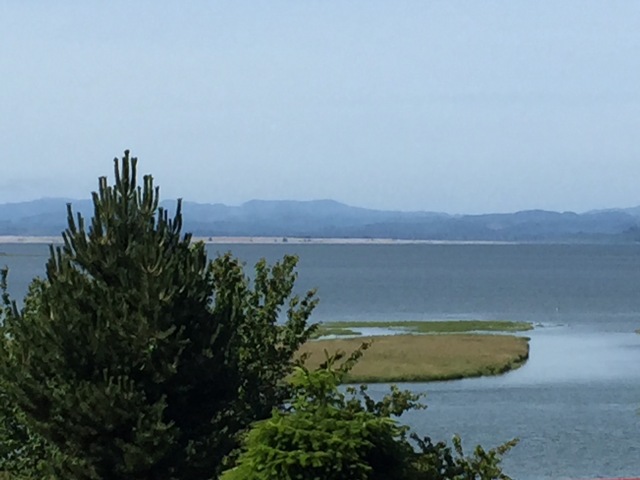 As  the Corps of Discovery neared the mouth of the Columbia, they felt immense joy at the possibility of reaching their final destination. However, the last stretch to the ocean proved extremely difficult. For several days, the Corps was pinned against the shoreline, trying to shelter themselves from strong wind, waves, and rain. Clark noted, “this dismal nitich where we have been confined for 6 days passed, without the possibility of proceeding on, returning to a better situation, or get out to hunt, Scerce of Provisions, and torents of rain poreing on us all the time…”

Finally, the team mad it around Poont Ellice, and established a terminus camp on a “butifull Sand beech” east of the present day town of Chinook.

After traveling over 4,100 miles up the Missouri River, over the Rocky Mountains, and down the Snake and Columbia rivers, the Corps of Discovery finally reached the end of their voyage.