I was awakened to the patter of raindrops in the middle of the night! It came down steady and as daylight grew, it was apparent it was here to stay. Packing up camp in the rain is always an interesting process. I pack up everything inside the tent in the waterproof bags I always carry. Then I unhook my tent from the inside and collapse it, leaving the poles and rain fly up as well as the ground cover. Then it’s a rush of quick trips to get everything to the bike and into the panniers as quickly as possible. The last thing is to pack the soaking wet rain fly and the ground cover. I put them in their own bags and strap them to the outside of my bags- they are soaking wet anyway and more rain on them won’t matter.

​​
The cyclists I met last night joined me for breakfast at the local Powell Lodge. We just weren’t too enthusiastic to head out into the pouring rain for the 13 mile climb up to Lolo Pass. I finally headed out at about 9:00am. It was 42 degrees out and only got colder as I climbed. About 4 miles from the pass, the grade increased to 8% for a couple miles before falling back to 5-6%. I watched the temperature continue to drop on my cycling computer and at 36 degrees, it started to snow!

Thankfully, I was only a mile from the top. I rolled into the Visitors Center and peeled down to thaw out. Another cyclist was there, having come up from the other direction. The Rangers had coffee and tea and hot cocoa for us which was much appreciated. As we waited out the snow, Jamie and Genevieve joined us, then two other cyclists heading west. So we hung out and exchanged stories as touring cyclists do. 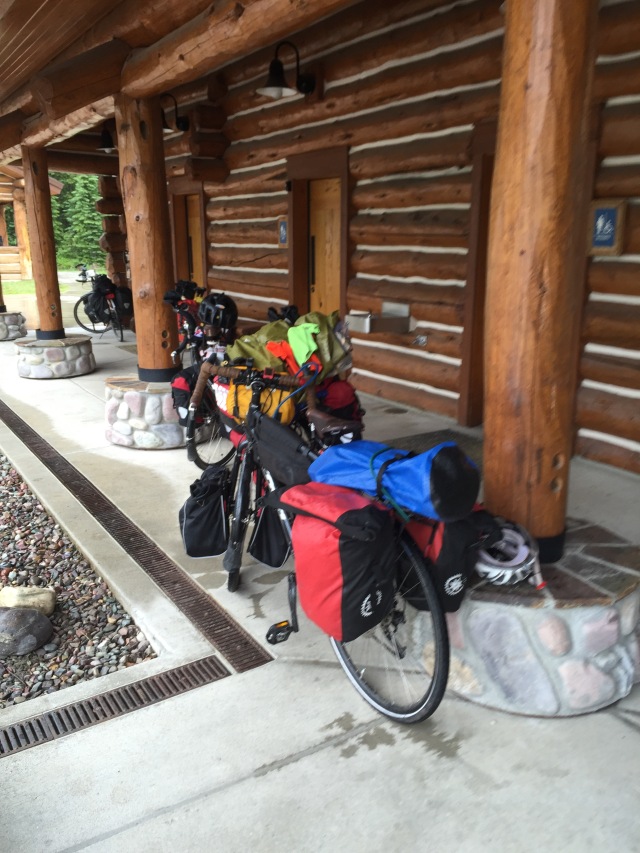 Since we are at the Idaho/Montana border, the time was changing. So by the time the storm broke up enough to be safe and it had turned back to a light rain, it was 2:30.

I put on every later if clothing I had and headed out, letting gravity do its thing, and descended the pass.

The weather broke as I got down to the Bitterroot Valley, with the sun occasionally showing its face. I found a place to recover and dry out, hoping the wet weather has passed.