The Foundation For The Future Tour is underway. Today was a great day wrapping up the 2014-15 school year at Liberty Christian School. At the last elementary chapel, the students “pied” some of the staff as a reward for their achievement of finishing the Million Minute Reading Challenge. At the secondary chapel, Bibles were given to our four international students and there was a great dialogue about the “18 inches” between knowing God in your head and receiving Hom in your heart.

School was dismissed at 11:30am and we had an all school BBQ and celebration of the year. I was blessed to have the students gather around me and Mrs Bjur, our Principal, prayed over the trip. Then it was a rush as the students cheered me off! I also appreciated the support of our local media, represented by our local TV station, KNDU, and the local newspaper, the Tri-City Herald.

I pedaled out from the school campus and quickly crossed the Columbia River into Pasco, WA. The heat radiating off the pavement was 105, but the wind wasn’t bad.

The Lewis and Clark Expedition traveled along this stretch, from where Sacajawea State Park is through the Wallula Gap, on October 18, 1805. They had just spent a couple nights camping at the confluence of the Snake and Columbia Rivers. Reaching this point was a great accomplishment, but the Corps of Discovery felt a little disappointment as well, because they thought the Snake River was the Columbia.

Along this stretch, L&C met Chief Yellipit and the Walla Walla tribe in the area of the Wallula Gap:

As I pedaled today, I passed the site of the Old Fort Walla Walla, first established as Fort Nez Perce in 1818 by the North West Fur Company. In 1821, that company merged with the Hidson Bay Company and the name changed to Fort Walla Walla. A little further on I passed the Two Sisters rock formation:

I’m now in camp after pedaling 50 miles this afternoon. Right across from my campsite is Hat Rock: 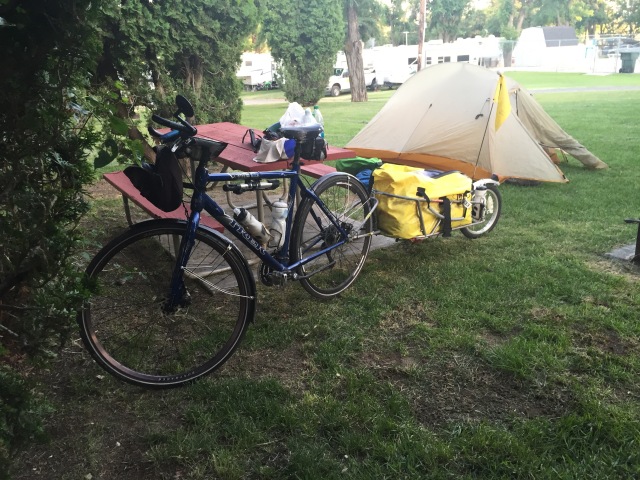 A very long but fulfilling day! Thank you everyone for your encouragement and prayers!